My nephews, 6 and 9, started building with Lego some four years ago. They started and never let it go. Till date, their eyes sparkle at the sight of Lego. Some new Lego on the block, is always on their wish-list, and all their earned points at home go towards procuring more Lego sets. Their house is full of the most outlandish Lego creatures, which the boys nurture with utmost possessiveness. Afterall those multi limbed rocket propelling outrageously ugly creations with lighted noses or whirring eyes, have each been created by a persistent toddler, bent over a copious amount of instructions, piecing together one brick at a time, for durations of time that could be considered mini-lifetimes for these kids! And then, just when it was high-time, Lego introduced a whole series of building sets with more 'feminine' themes---like friendship and fun, aimed precisely for the little girls. And just as it should have been, the aunt of my kids---the lady with two Lego fanatic boys, presented my five year old daughter with her very own Lego for girls. Bingo! the girl cousin was hooked. Like my sister--the aunt---I am now collecting minute pieces of Lego---no really they have Lego hot dogs, and Lego flowers-----from the dust pan every time I sweep the floor. If I let those pieces go, I am considered a negligent mom--by my daughter.

The moral of the story thus far is, that if you are a mom/dad, or an aunt/uncle, of a Lego crazy kid, then chances are you are just as bugged with this Lego fervor as I was. After all the Lego sets are NOT inexpensive, and once the set is made, that's it---what next? Nothing. The creation needs its own space, and the child now needs the next Lego set. Of course we encourage the kids to re-use those pieces, and sometimes they do, but their thirst for more pieces and more sets is hard to quench. In this context, I want to write here about Nathan Sawaya's work. He is better known as the Art of the Brick guy. I had the fortune of visiting his exhibition currently running at the Discovery Museum in Times Square, of course with my five year old. And was I impressed?

Beyond that! The exhibition was a delight, because what we get to see there are world's famous landmarks, and works of art, rendered now in this medium--of the Lego. So we have a Lego Statue of Liberty, and we have a Lego Mona Lisa, and a Lego David, and tons of the familiar traditional and modern musings in Lego. And the precision of these reproductions is simply breathtakingly accurate. To be in that hall looking at 'paintings' created in Lego, framed in a 'frame' of Lego, is to suddenly be reminded that creativity literally is thinking out of the box, even when the building material may come in a (lego) box!

I was happy to be there with my kid who I could orient at least in two ways: I was able to talk with her about some renowned pieces of art (without having to fly to the Louvre), and I was able to be amazed with her at how a person can use creativity in so many different ways. This was one exhibition where my kid was rapt with curiosity from start to finish, and I didn't even have to promise a candy at the end.

I loved the exhibition, but I have to say that it is a small exhibit....it will not take anyone more than an hour at most to see it all (and there is no re-entry once you exit it). In that light, I feel the price of entry is somewhat on the higher side ($23 for adults and $18 for kids). I know there are Group discounts, and I highly recommend availing those discounts and NOT missing this visit.

Overall, Nathan Sawaya's catch-line says it all, and is worth coming home with to inspire all kids: Holding a tiny red Lego brick in his large hand, he says, "Every dream starts with a Brick"......Indeed.

For me, his rendering of Girl with the Pearl Earring--that famous painting by Vermeer, is so lovely, and so beautiful that I know that even when the original Vermeer is on loan for this winter to the Frick Collection in NYC (from the Dutch), I think I have seen it already--at Discovery Museum! 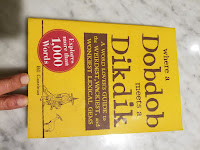